By Jon Michels
The Ice Caves of the Apostle Islands Region

Found along the shorelines of Lake Superior in the Apostle Islands Region of Wisconsin are unique, fantastical ice formations. Their beauty and mystique draws visitors from all over the United States, even a few from overseas.

The most famous and grand of these ice formations are located along the mainland stretch of shoreline of the Apostle Islands National Park, approximately 5 miles east of Cornucopia, WI, and 15 miles west of Bayfield, WI. Access is available from the Parks' "Meyers Beach" visitor Site.

To visit these ice caves, one must venture onto the ice of Lake Superior and walk up to 3 miles (6 round trip). Because of Lake Superior's large size, volume, and exposure to wind, this section of shoreline infrequently forms ice deemed safe for visitors by the National Park Service. 2015 was the last year visitors were allowed on the ice.

Though not as extensive and grand, there are ice formations found along much of the area's shoreline which are accessible for people to visit when ice conditions permit. The shore stretching from Bayfield north is protected from large waves and safe ice forms usually in the month of January.

What are ice caves? 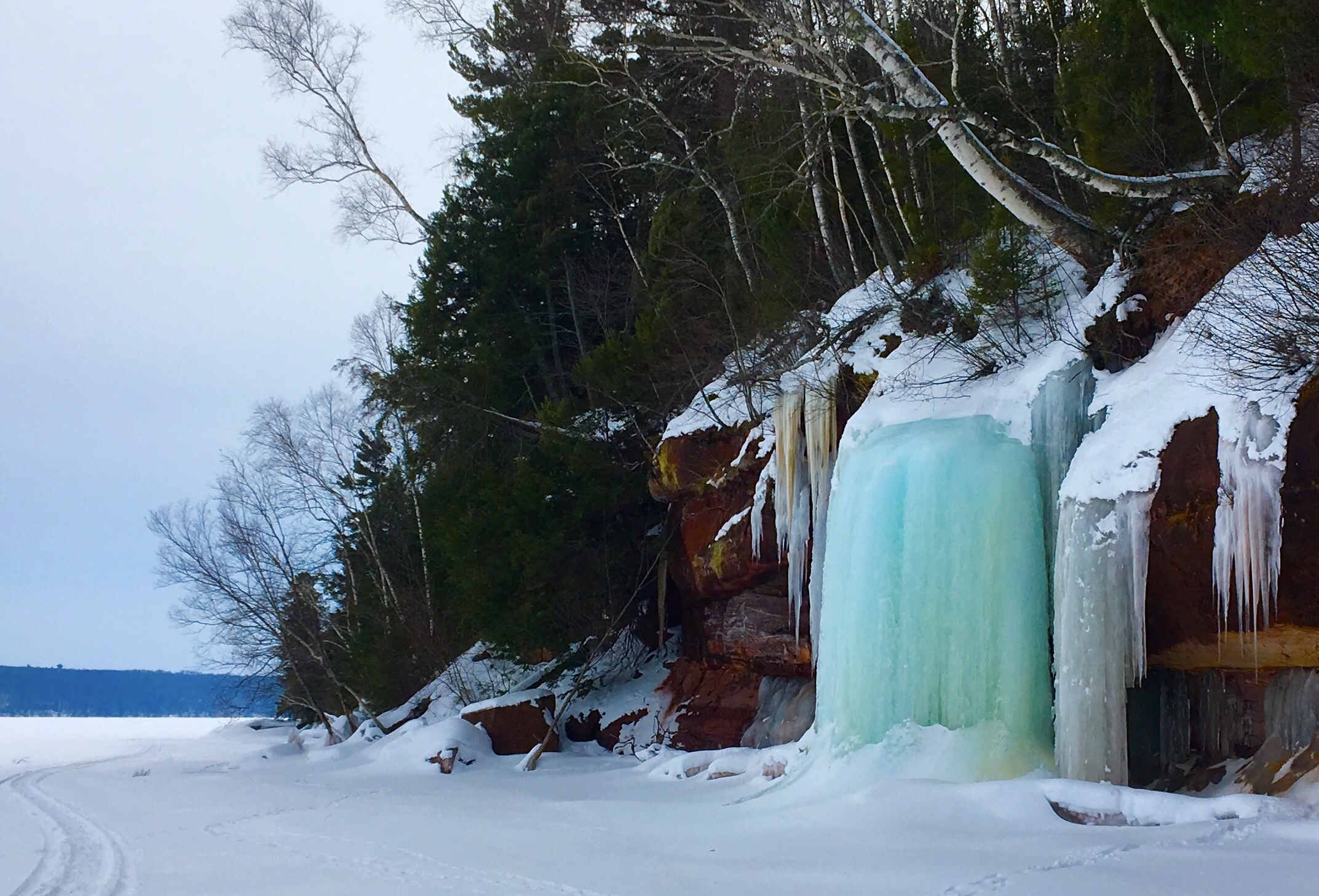 The Bayfield Peninsula and Apostle Islands area is underlain by a thick layer of sandstone. The "Bayfield Group" Sandstone consists of many thousands of feet of layers with differing characteristics including varying sediment type (sand, silt, clay, gravel and boulders.)

Sandstone forms when sediment layers get buried for eons where compression, heat and mineral fluids combine and "cement" the loose materials. Depending on the conditions of the layers, some are relatively hard, and some are relatively soft. When a softer layer of sandstone is positioned at the level of the lake, and a harder, well-cemented layer overlies it, all it takes to carve out a sea cave is large waves generated from the open lake. Sea caves dot the shoreline where these conditions exist.

So we have sandstone and sea caves along the shoreline. All we need now is water to form ice. This is not lake water but "groundwater" that seeps from the cliffs and cave walls. Inland, high above the lake level, rain and melting snow percolate downwards through sandy soils and into the Bayfield Group Sandstone.

Once the water reaches the "water table", it begins to flow via the force of gravity to the lowest point of the water table. In this region, that is Lake Superior. Groundwater here is about 46 degrees Fahrenheit and in summer and winter continually seeps through the sandstone, discharging from the cliffs and and cave walls.

Many different types of ice can be found here exhibiting various colors and form. Ice is essentially a mineral and acts much like the formations found in famous caves around the world. Long icicle shaped features are common and are the equivalent of a cave "stalactite". Formations the form from the bottom up are essentially "stalagmites".

The varying colors of the ice formations can be attributed to impurities in the water. Reddish formations are common and are indicative of the higher concentration of iron in the region's soils and rock. Yellowish ice is common and most likely is colored by lower concentrations of iron and perhaps organic materials in the soil. Blue ice is less common and probably results from a higher level of clarity or lack of impurities in the water.

Visiting the Ice CAves and Formations

Venturing out on Lake Superior's Ice has some hazards. At the Meyers Beach Ice Cave Site the Apostle Islands National Park monitors and regulates access to the Lake ice. They provide postings on their website with updates on conditions. As stated, they have not opened up ice access since 2015. Here's a link to the most up-to-date information for the Meyers Beach Ice Caves.

The Bayfield/Red Cliff Ice Caves area is usually safe for foot travel in January. In most years, an ice road for cars and lighter trucks is opened between Bayfield and Madeline Island. Ice safety experts determine whether conditions are safe. Deep snow is also a factor. Using snowshoes or skis is the best way to travel distances to explore the ice formations.

Along the shoreline north of Bayfield and Red Cliff, we offer guided tours of the ice caves and ice formations. Our knowledge of ice conditions and locations of ice formations makes this a great option for those seeking a winter adventure. Here are eight reasons a guided tour may be your best option:

Click the button below for more information on our tours.

Tour Details
Sign up for special deals, sales and updates

Thank you! Your submission has been received!
Oops! Something went wrong while submitting the form.